MantiumRAY won the fourth round of the KVRC Challenge! Results can be found here. 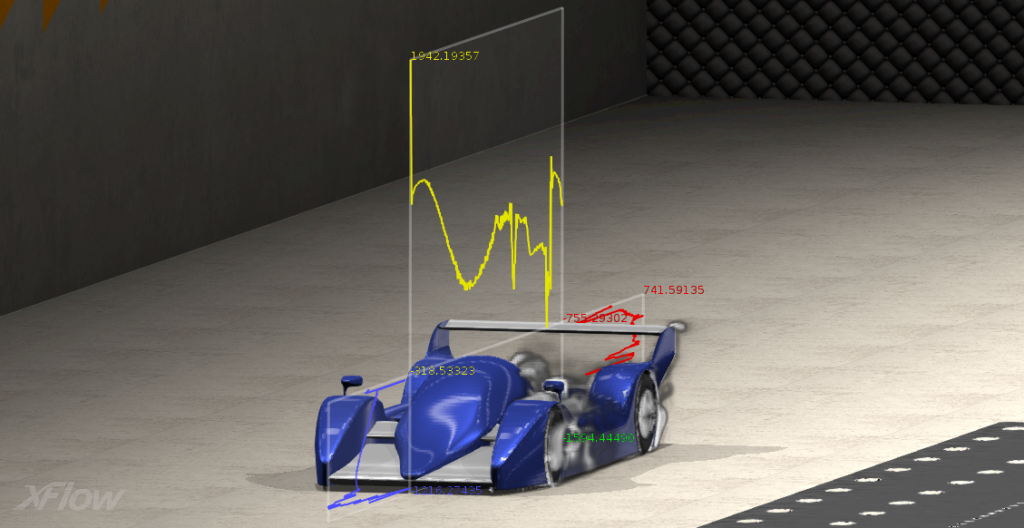 This time XFlow was used for most of the development. XFlow proved to be very useful as using old results for initialization and the almost non-existent meshing time (in the range of two minutes) helped to quickly run simulations. As XFlow also comes with post-processing capabilities, visualizing the results was easy and quick. Because only limited time was available due to other projects these strengths proved to be very valuable and lead to this victory.

But technical aspects aside, the car was so happy about its first victory it made a back-flip using XFlow’s body dynamics solver:

MantiumCAE will be presenting more about this and other simulations related to motorsports during the XFlow User Conference in Madrid. 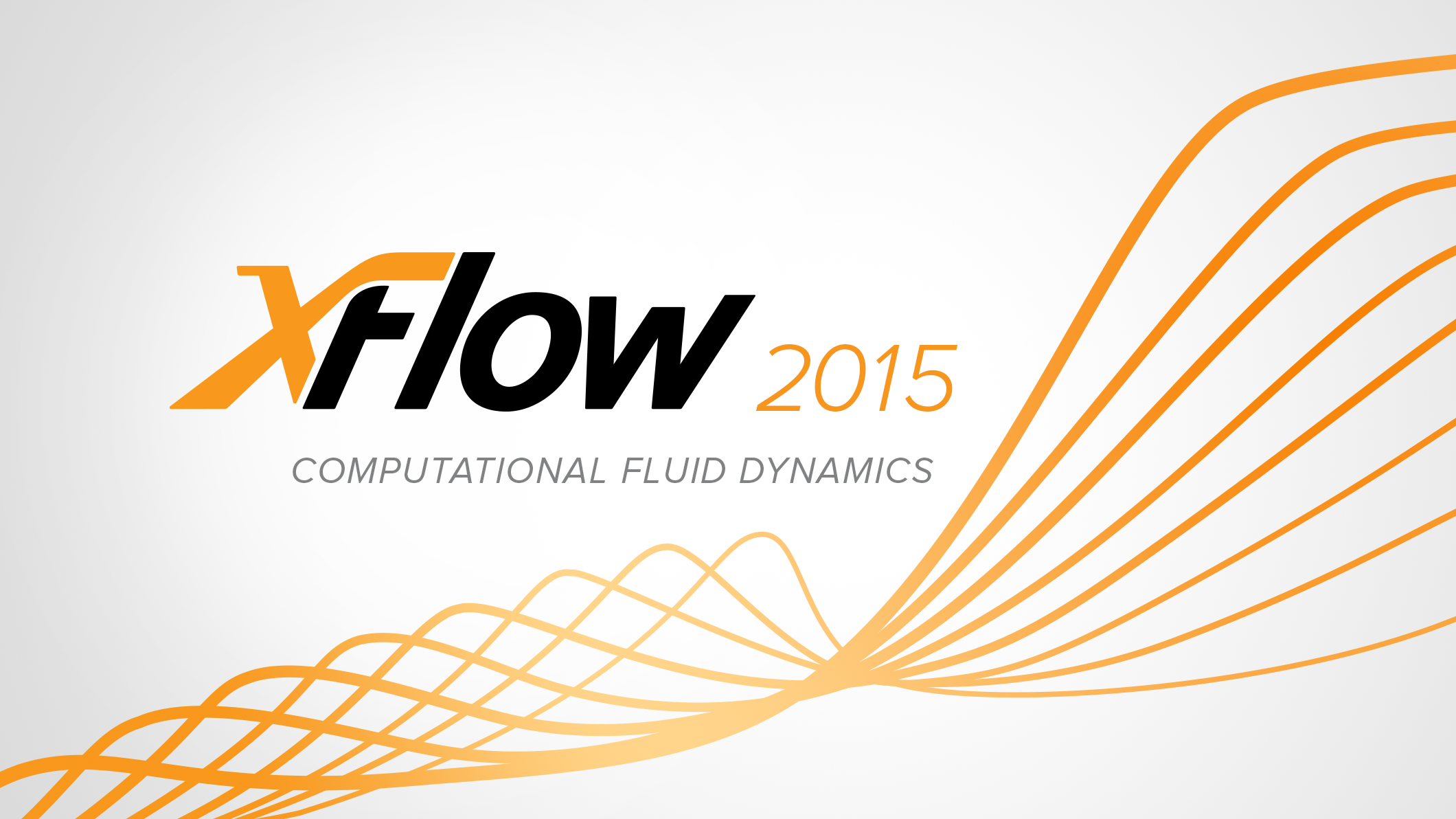 Build 96 of XFlow has been released. It is available to our customers through the client area.
The new features and improvements cans be found here.

Please also take notice of the XFlow User Conference at which also MANTIUMCAE will be presenting:

After MantiumRay, the virtual racing team of MANTIUMCAE, scored the predicted third position in the last race of the KVRC challenge the time had come to use some more sophisticated methods to develop the car.

As the challenge is a great environment to learn and test new software. The car was modeled using Blender. While Blender does not replace a professional CAD software it has proven to be a good tool to create new designs. It is also useful to create nice renders of the car.

For the upcoming race which will again be held at the Nürburgring the car got at least some of the treatment it needed. For this CAESES was used. CAESES is a software that can create parametrized geometries, execute DoEs and optimizations and is also great in analyzing the results.

First a new rear wing was created to fully comply with the KVRC regulations. This meant that a quite thick rear element was needed. While this in general does not aid aerodynamic performance, a wing was found that was slightly better than the previously used design. This new design can be seen below:

To get a much better understanding of how the entire car works CAESES was used to run a design exploration. For this the Blender model was prepared by creating vertex groups which would could then easily be accessed. Also a python script was created to move these groups and then export the new geometries. CAESES accessed the values responsible for the movements and executed the script. The CFD setup was similar to the one used in the challenge. Mainly it was coarsened up to improve the speed. The report exported by CAESES can be downloaded here: MantiumRAY_DoE. Most design variables and responses should have somewhat meaningful names.

After that a small optimization was run. The results of that where a bit surprising. An additional optimization was then run only focusing on the diffuser. The following animation shows some of the parametrization of this part:

Usually a diffuser should steadily increase the cross section to expand the airflow. In this case the surprising result of the optimization was to have the rear end taking a small bump downwards before it fully expands. Manually creating diffusers fixing this did not show any improvements. If this is a solution that works in real life or is due to the rather coarse CFD meshes used in the challenge has not been analyzed until now. The following image shows the airflow and highlights a cut through the diffuser with a pink line: 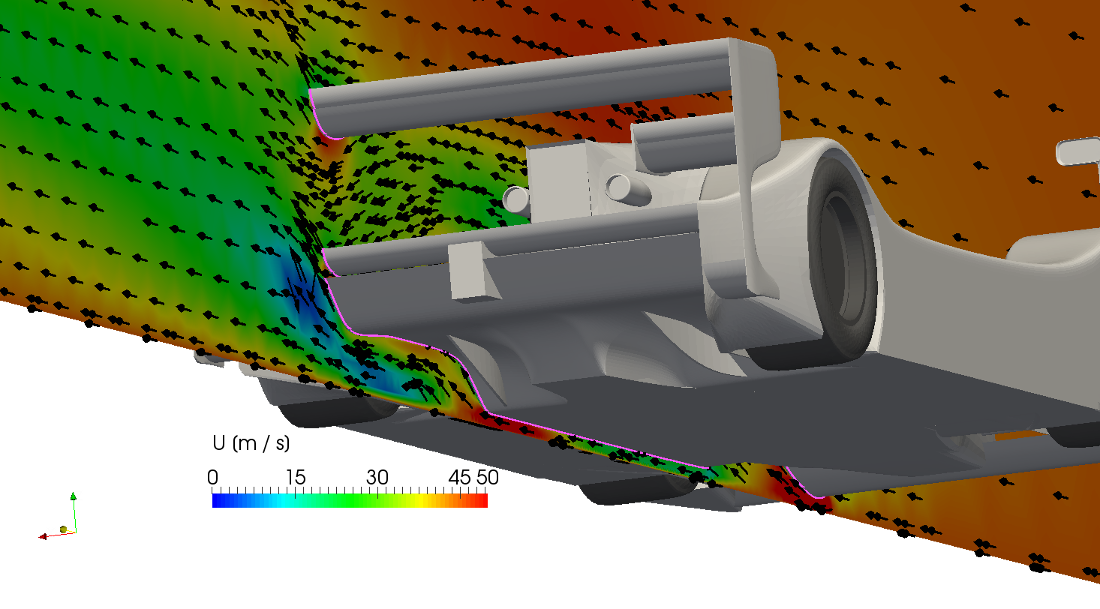 While the car still does not quite reach the performance levels needed to win the next race the optimization showed some nice results:

The following two images show the car for the next race: 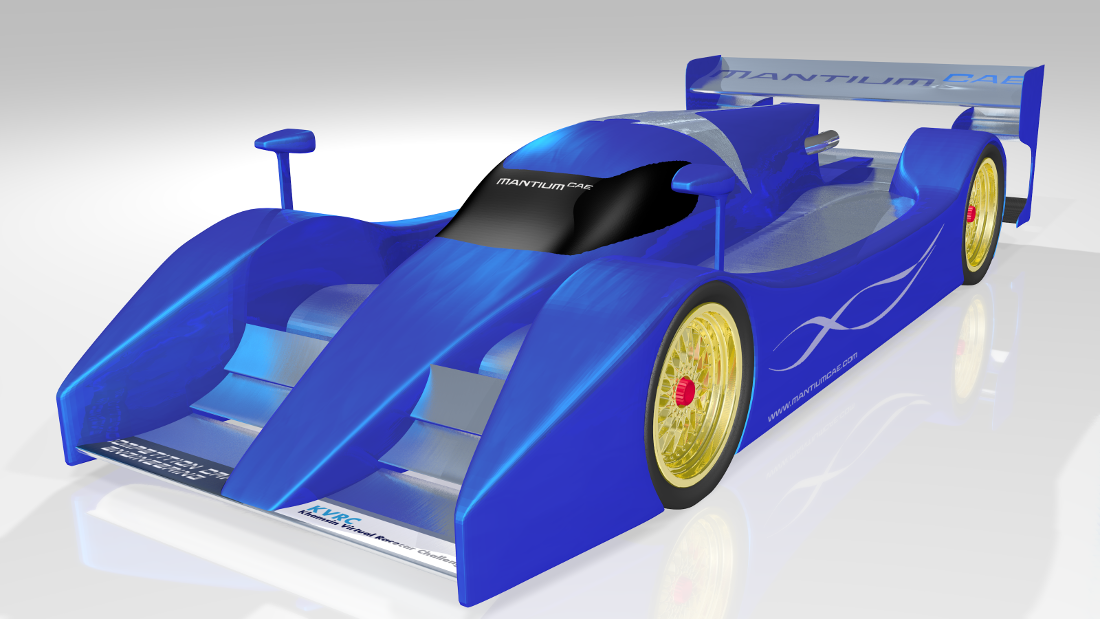 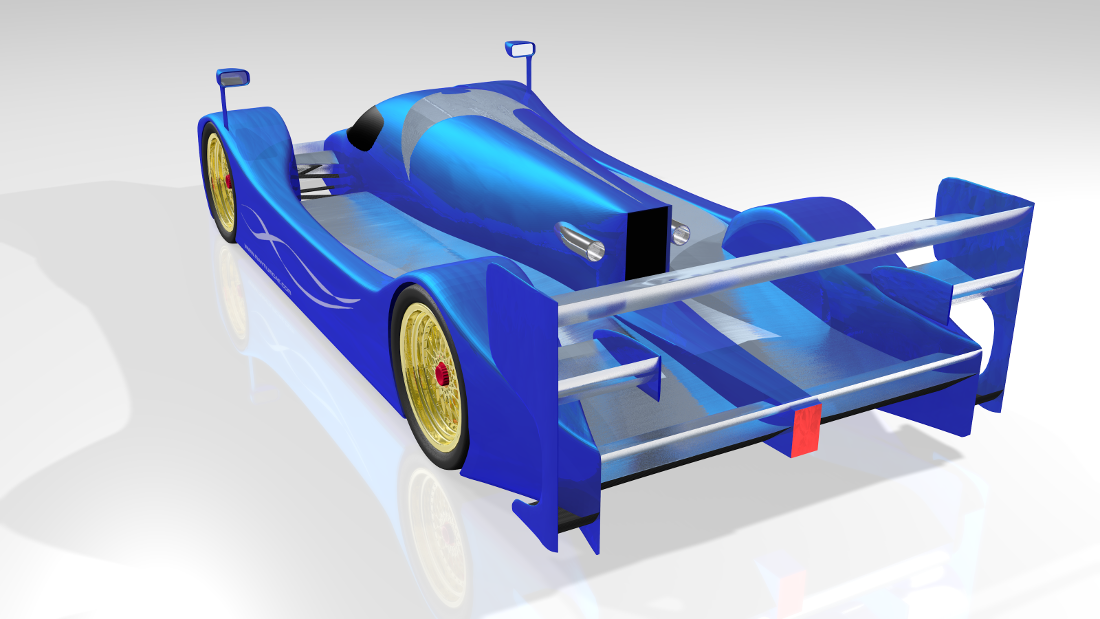 The next results should be released soon. Lets hope for a strong position for MANTIUMRay. The next races will then require a very different aerodynamic setup. So this will be the last race of the car in the current configuration. A completely new design will have to be developed. Depending on time and resources, maybe using DoEs and optimizations will help to create some victories.

With the KVRC Monaco race coming up, we present the new MantiumRacer.

Unfortunately it has not seen the Mantium treatment yet. So the car has now mainly been developed using conventional methods.
The car will get much closer to the podium but will probably, at best, reach the third position. 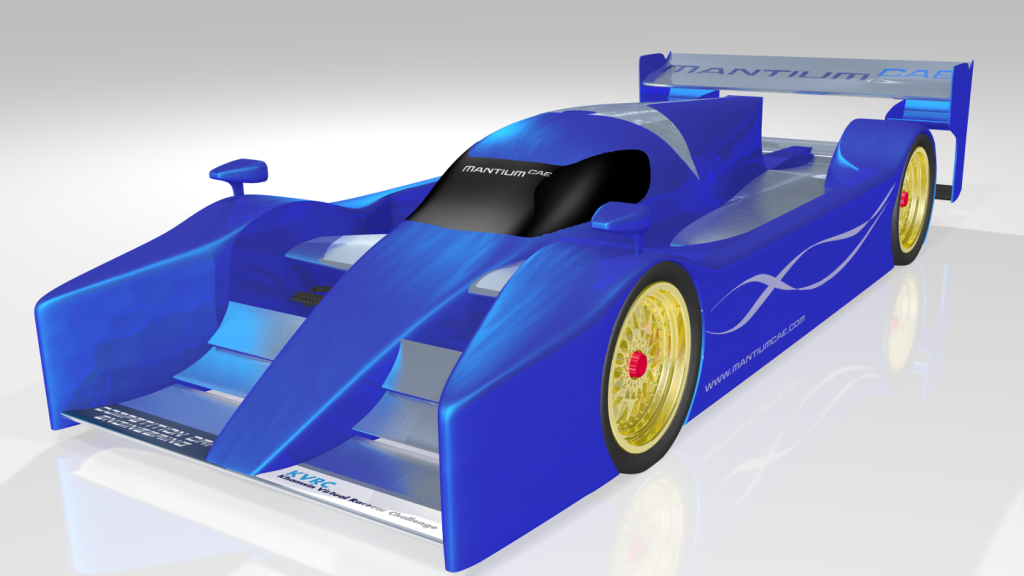 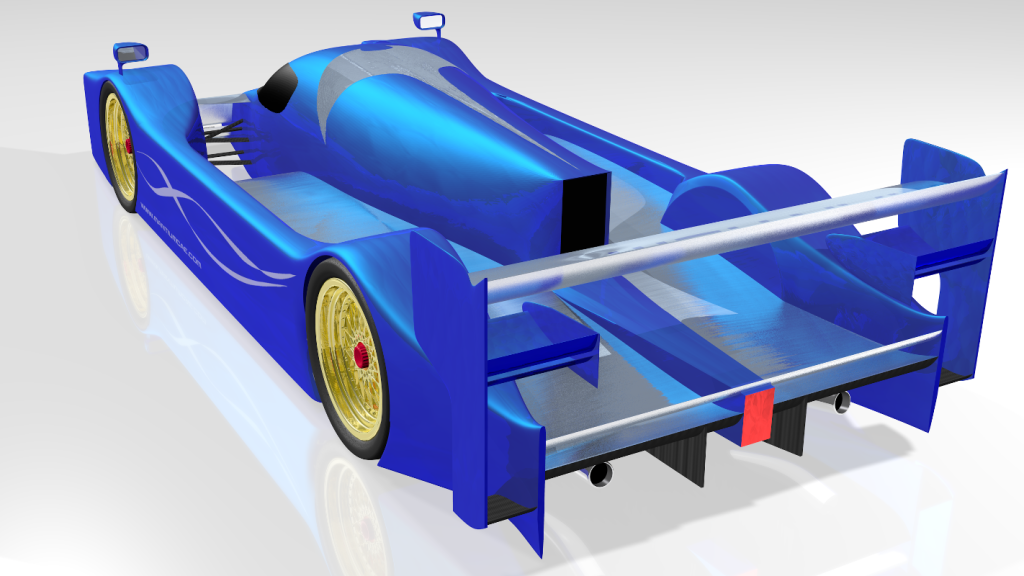 MantiumRacer for Monaco seen from behind

Some parts are carry-over from the first race. Many others have been redesigned. On the first car the considered options for the cooling outlets were above the floor or behind the rear wheels integrated with the fender. Both affected downforce negatively but shifted the lift balance in a favorable way. Now the cooling outlet is integrated behind the drive train together with the main body. This showed to be aero-neutral. Also the exhaust was integrated into the newly designed diffuser. Having the exhaust here gives some gains in downforce. Other positions resulted in detrimental downforce values. Also the front has been redesigned with a low nose and a larger three element front wing. Shifting the side-mirrors further outward resulted into significant gains in downforce and lift balance. After the large front wing the air has quite some trouble to reattach to the car and create a nice clean air flow to the rear wing. Having the side mirrors in this area did not help too much, so now they are located in a less critical position.

As first optimization work has been carried out though, some results of the rear wing will be shown. Below are results from optimizing the rear wing profile. As the base design of this wing profile was already so good the downforce coefficient could not be improved any further. There are some designs with a better efficiency at lower downforce values. These wing profiles might come in handy at later races which require less downforce but more aerodynamic efficiency. 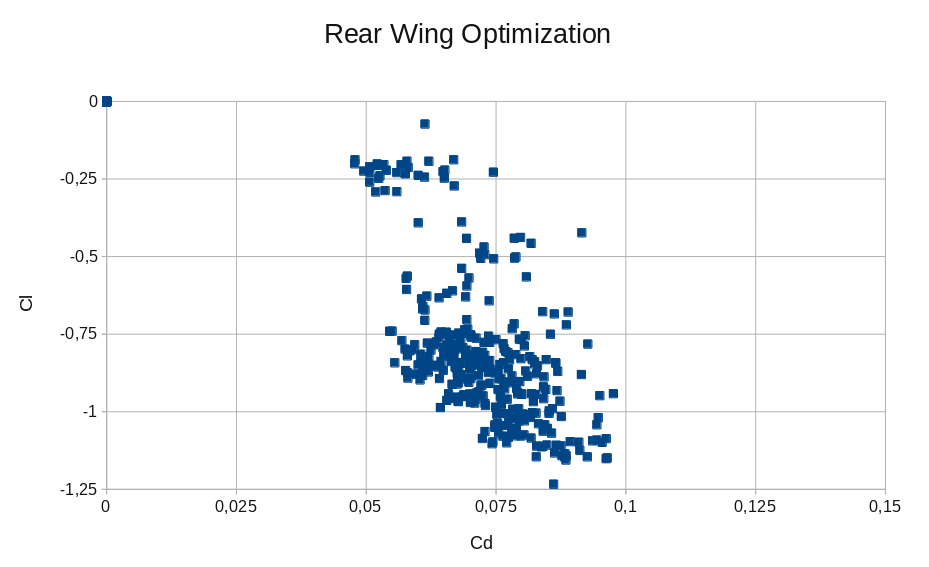 Cd over Cl for the rear wing profile.

You can follow further discussions about the challenge on f1techical.net.

MantiumCAE is proud to present the new company homepage.

Please feel free to have a good look around.

Also we have entered the KVRC Challenge 2015. It is a virtual challenge to design a Le Mans prototype vehicle.

The first race was last weekend. Unfortunately MantiumCAE did not reach the podium.

Now it is time to use the tools available here at MantiumCAE like XFlow and OpenMDAO to develop a car with a more pleasing and competition crushing performance.

We will inform about the methods and progress on these pages. 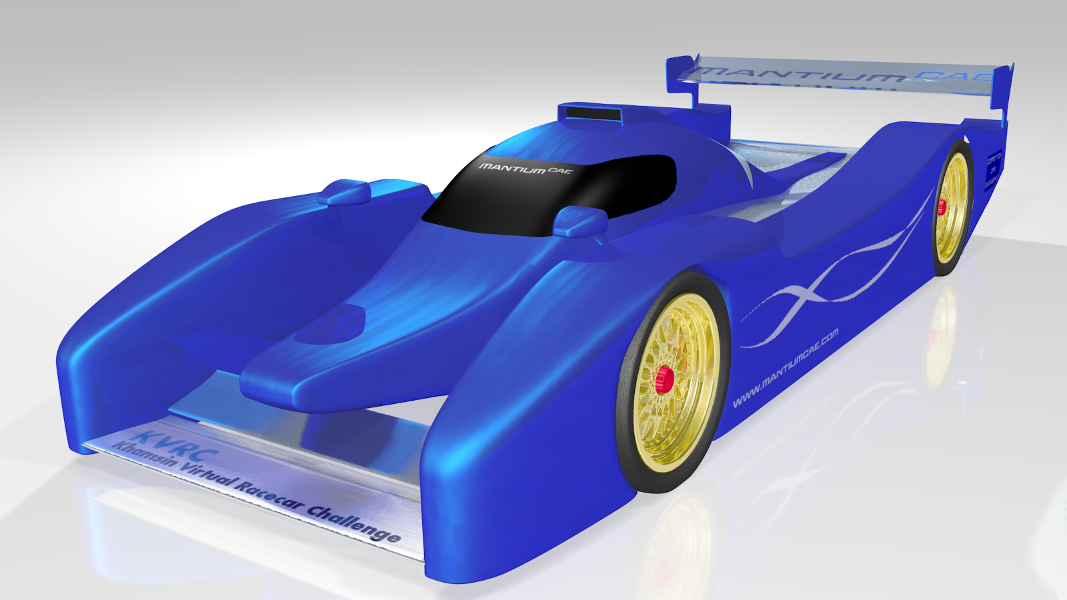