VisualDOC has been updated to version 9.0

Among the new features are a “What-If?” study tool, a direct TAITherm plugin and much better access to the documentation and tutorials through the GUI. All new features can be found here:

ESLDYNA has been updated to version 17.0 mainly enhancing it with BAR elements with sizing and topometry.

GENESIS has been updated to version 17.0 and contains a number of new features:

GENESIS Design Studio has also been updated to version 17.0 and also features a good number of new features:

If you would like to know more, please send us a message.

MantiumCAE visited Dynamis PRC at the Hockenheim 2017 Formula SAE event. Seeing and hearing the car was great. Also seeing the Mantium logo on the car was fantastic. The main event happened on Sunday during to endurance race. Here Dynamic PRC took low risks as many cars failed but ended up being the forth fastest car! Unfortunately the next reward did not come to fruition as when probing the fuel the car caught fire. Luckily there was not much damage but the team could not score extra points for the anticipated low fuel consumption. 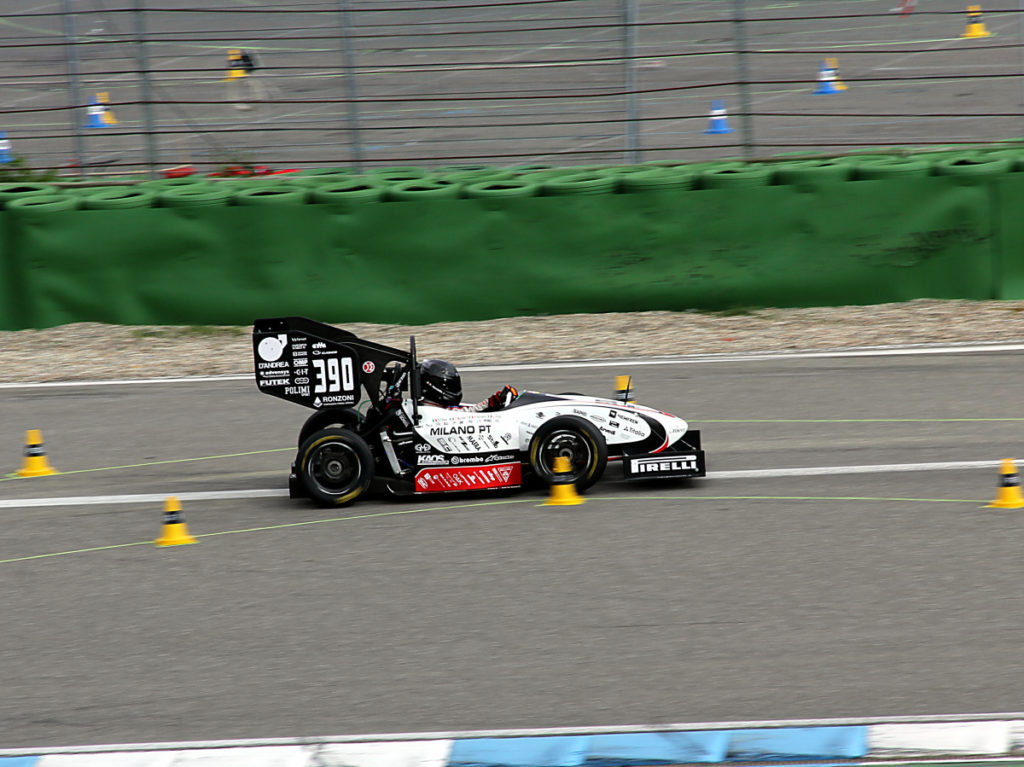 Visiting the team was great. If any other Formula SAE teams are interested in using software available at MantiumCAE then please get in touch.

As MantiumCAE is a sponsor, we are very proud to have the logo on the car and congratulate the team on this result. The full results can be seen here.

MantiumCAE provided the team with MantiumFlow, a CFD software which will officially get released within the next few days.

If you or your team needs CFD software or consulting, please contact us.

MantiumCAE is proud to announce to be a new distributor of Vanderplaats R&D products for the DACH region.

Vanderplaats Research & Development, Inc., (VR&D) was founded by Dr. Garret N. Vanderplaats in 1984 for the advancement of numerical optimization in industry. Dr. Vanderplaats is a widely recognized expert with over four decades experience in the optimization field. He is a Fellow of the AIAA and is the 2002 recipient of the AIAA Multidiscipline Design Optimization Award “For his great impact on the application of optimization to engineering design through teaching, algorithm development, and the creation of outstanding software.” Over the years, the company has evolved into a premier software company, developing and marketing a number of design optimization tools, providing professional services and training, and engaging in ongoing advanced research. All developers hold advanced degrees (most with Ph.D.s) in design optimization and collectively have nearly 100 years experience in optimization, research, and software development.

The main products are GENESIS and VisualDOC. GENSIS is fully integrated structural analysis and optimization program. VisualDOC is a general-purpose graphics based design optimization software which was released in 1998.

In addition there are further products to for example expand the structural and optimization capabilities of Ansys products.

This new channel partner agreement will help MantiumCAE to expand the products and services we can offer to our clients. If you have questions please contact us here.

New features are available in XFlow 2017

With the new immersed boundary method simulations with moving parts will be much faster. Especially simulations with pumps where the rotor rotates through a large relative portion of the domain this has shown great benefits.

The new super sonic and thermal capabilities will enable even more challenging simulations to be run with XFlow:

With the improved GUI using XFlow will be simpler to use than ever before:

This webinar will provide an introduction to the most important improvements and new features of XFlow’s latest release. 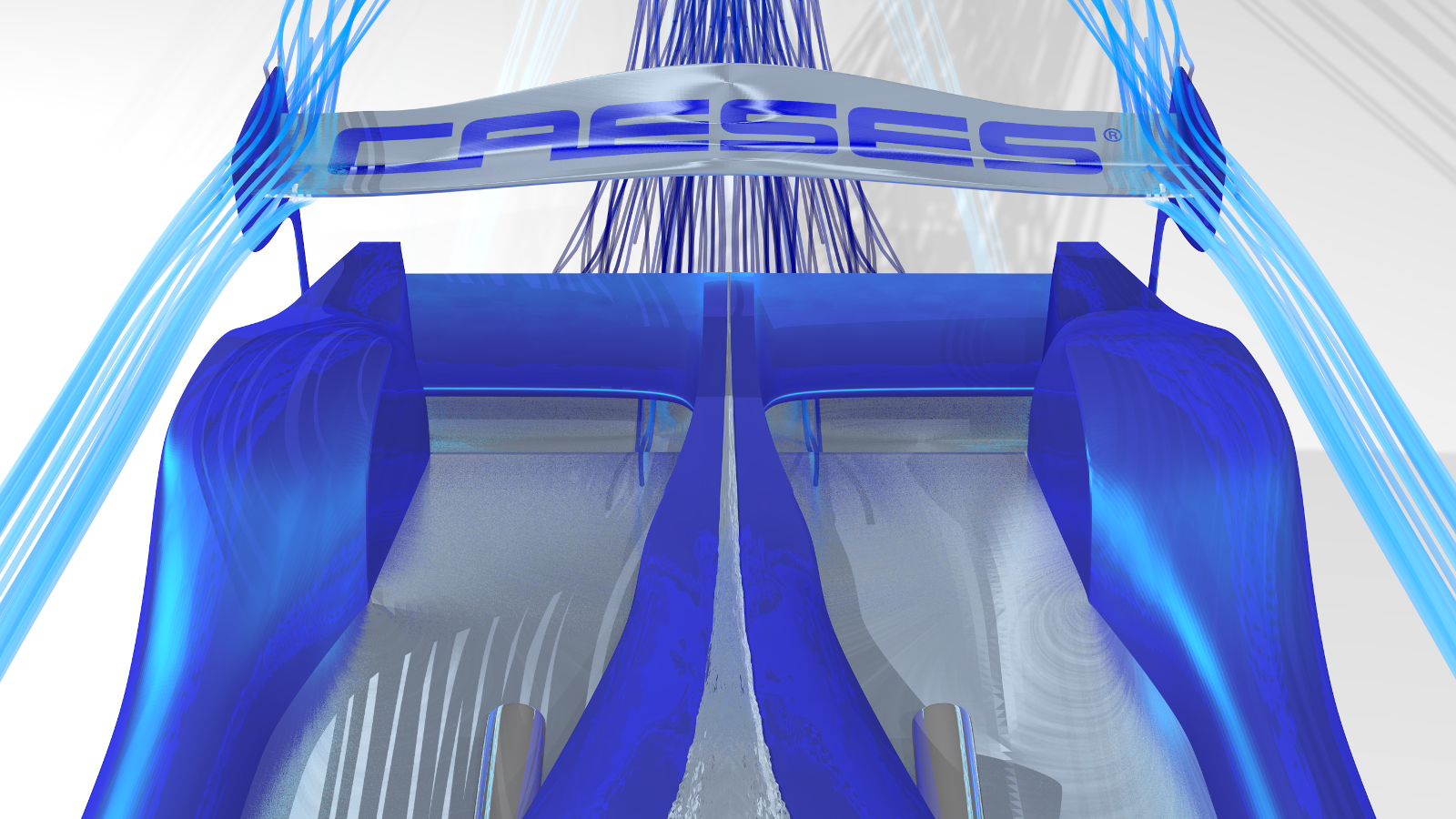 MantiumRAY the virtual racing team of MantiumCAE has won the last 2015 KVRC race. This was mainly achieved with considerable use of CAESES.

As written in an earlier post, CAESES was used to create a new rear wing to improve overall aerodynamic efficiency. Now some colorful post-processing images are available: 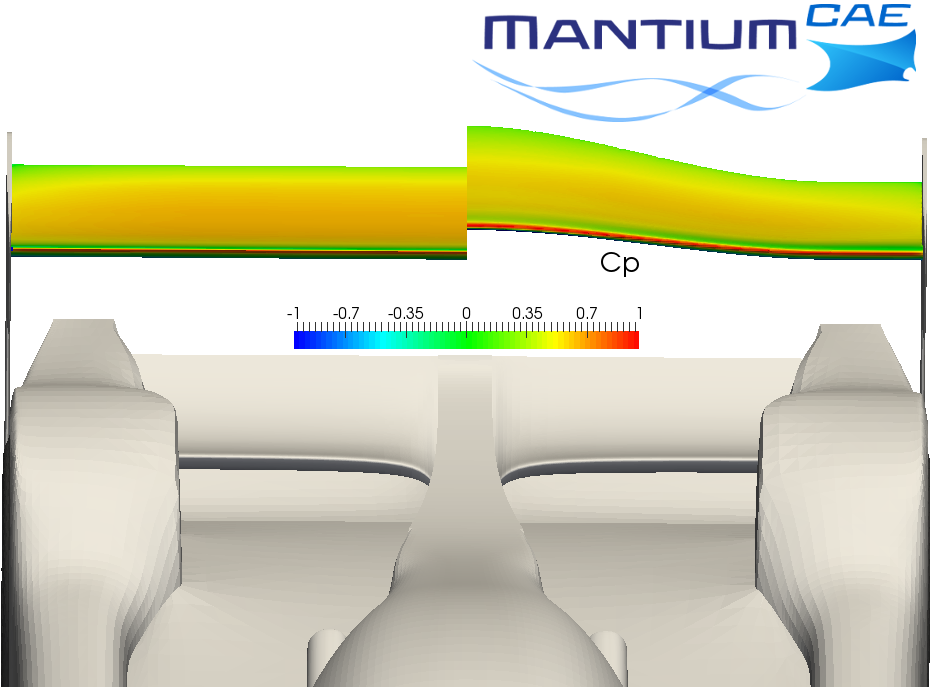 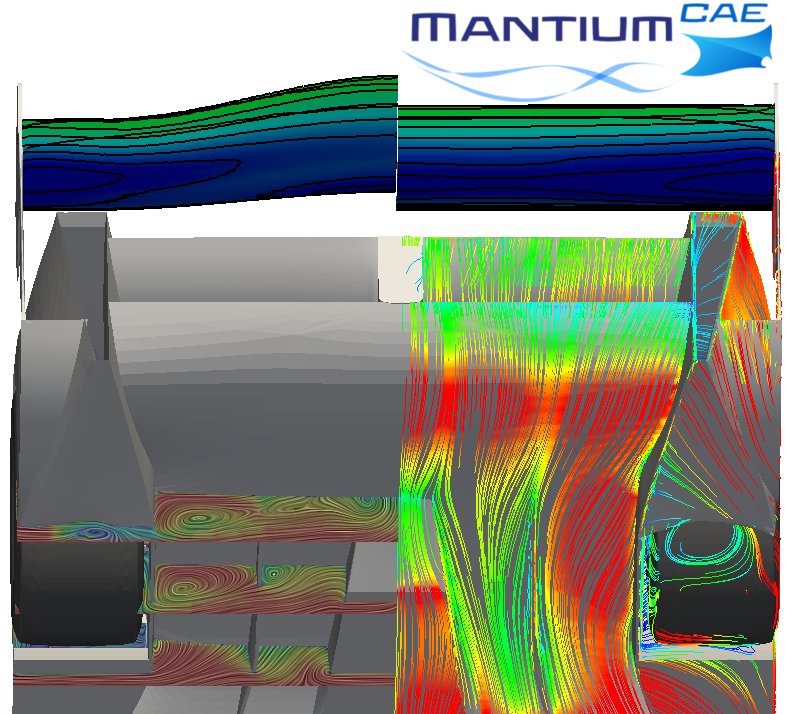 Just looking at pressure distributions or statistical data from the optimization does not help to understand why this new wing is so much better compared to the old straight wing. Looking at the lift distribution of the two wings reveals more: 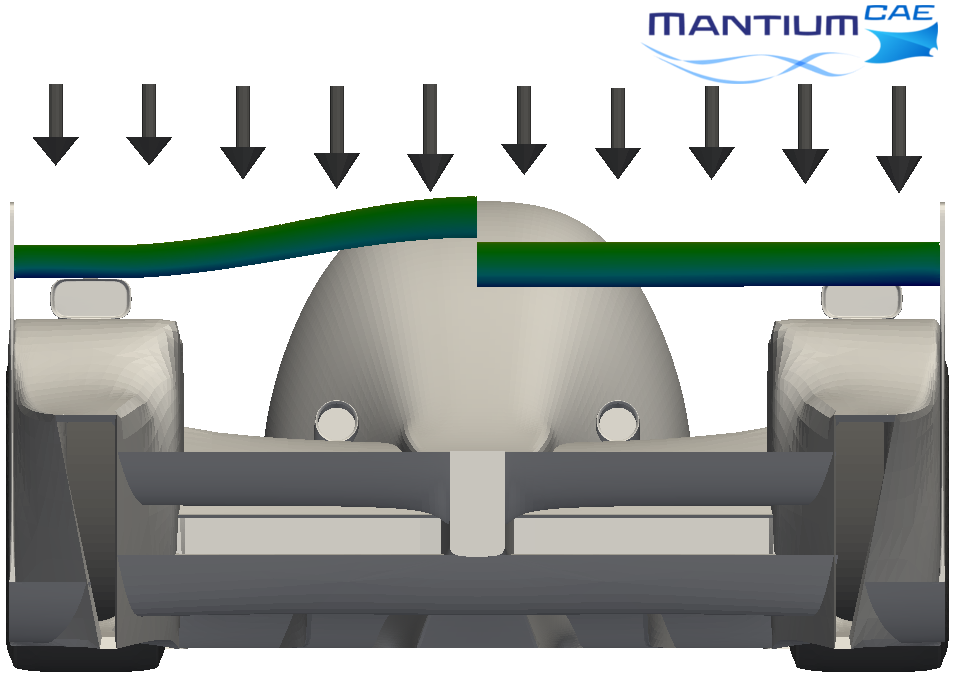 While the lift for the straight wing is almost equally distributed along the wing span with a bit increase at the ends, the curved wing has its lift maximum at the wing center. This is a nice example of how optimization techniques can help to develop new knowledge. In this case the resulting lift distribution might not be very surprising, esp. for an air craft engineer. It should be kept in mind that the optimization algorithm did not “know” anything about lift distributions but came up with something very plausible. Hard numbers also confirm the improved performance. The lift to drag ratio is increased by 27% compared to the already very good straight wing.

A 27% increase in aerodynamic efficiency is very good for such an important part of the car. The other two most important parts are the front wing and the diffuser. The air flow and pressure distribution under the car can be seen in the following slice taken 0.5m off of the vehicle center:

The image shows two things. There are still a lot of parts that can be improved. The upper side impact structure could be covered much smarter. And the recirculation zone right under it does not look to nice either.
The pressure distribution might help to explain the strange diffuser shape. The shape was already a result from an earlier optimization and was created once more for this race. Looking at the pressure distribution it seems that the downward bump at the end somehow helps the create a zone of slightly reduced pressure ahead of it. Further investigations are necessary and will be done in the future.
Apart from that it can be seen that the front wing creates a lot of downforce although it was even raised a bit to help balance the car.

All this results in a victory with a nice gap to the second car:

Establishing a good process using geometry parametrization, coupling it with a CFD software and running optimizations is never an easy process. It requires experience, time and a lot of patience. It took some races for MantiumCAE to successfully implement it for the challenge. Next year everything will be ready and MantiumRAY should be in a good position to continue winning races.

Hopefully this article helps and gives some insight into how a car for the competition can be developed and helps to understand what can be done with CFD. Even more help is given by one of the competitors, CAEdevice from Italy. Their car can be downloaded here. This should be a very good starting point for anyone who wants to join this fantastic challenge.

Below are two images of the final car with some stream lines: 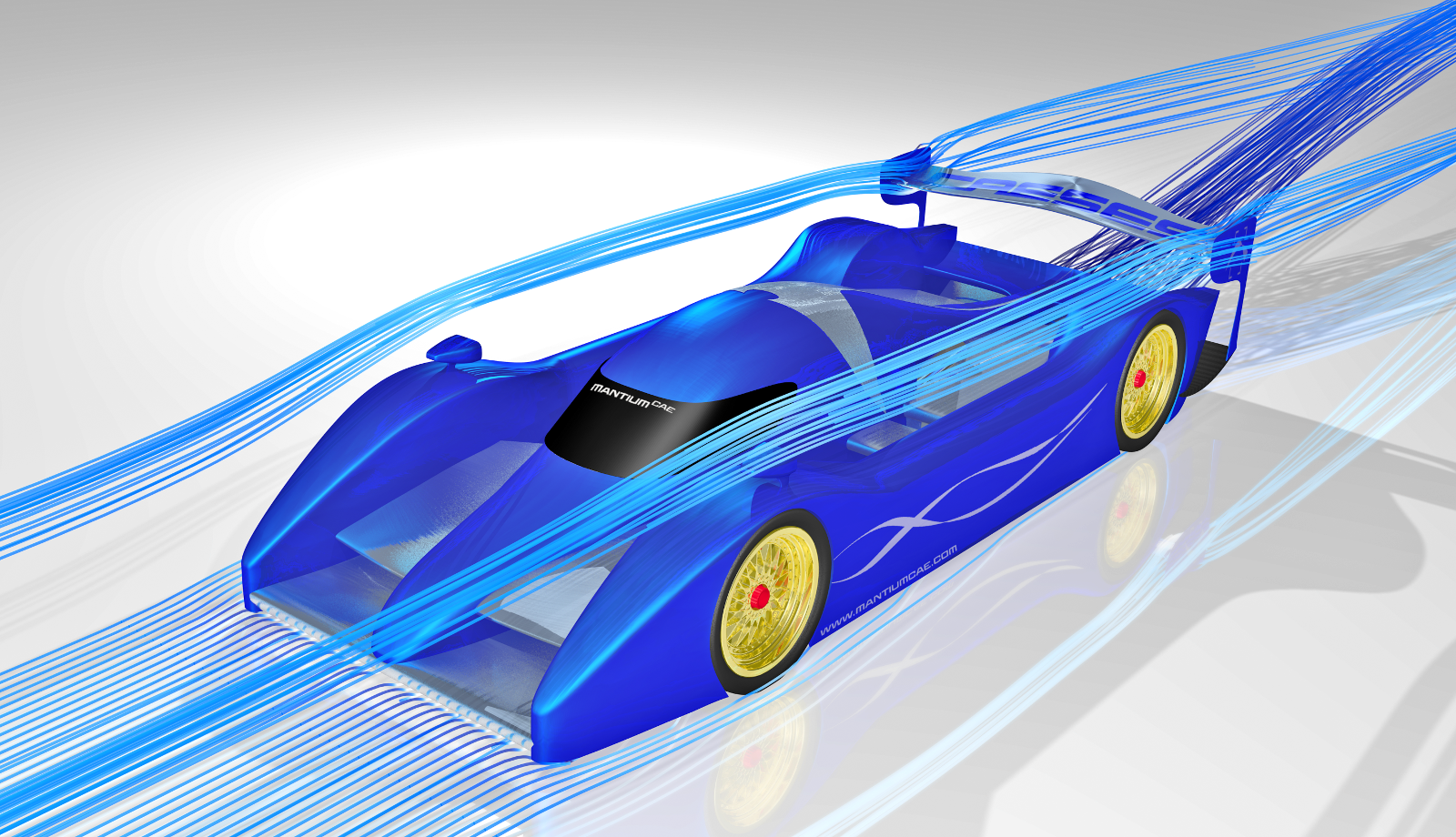 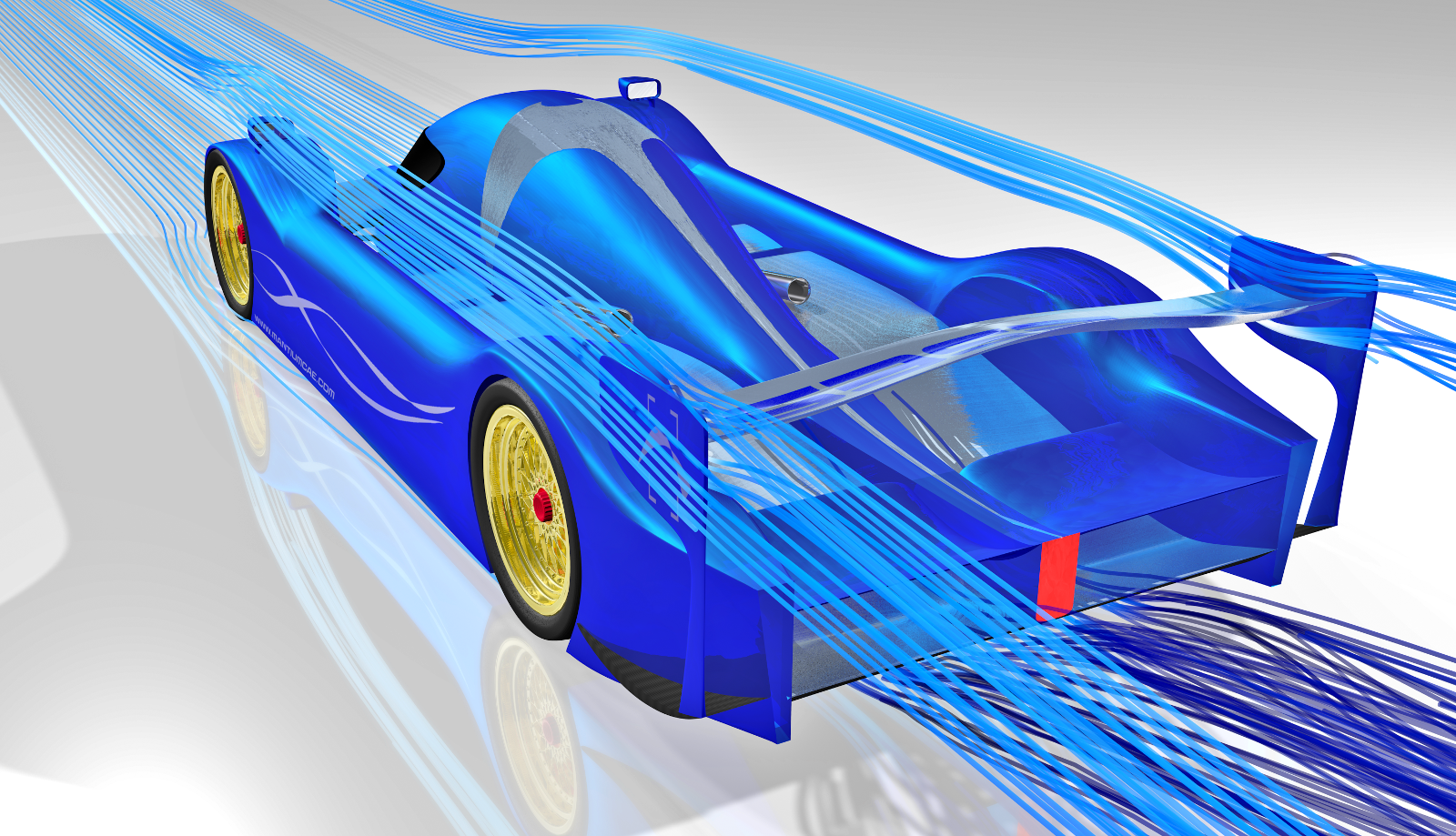 The car still has a lot of space available for sponsors. Esp. decals of HPC providers should look very good.

MantiumCAE is proud to announce being a new channel partner for CAESES for the DACH region.

CAESES is a great software to parametrize complex geometries in a very efficient way.
The parametrized geometries can subsequently be used to execute DoEs or optimizations, as CAESES couples with many CFD products like XFlow or OF.
This homepage will be updated soon. For more information, please visit the official homepage, where it is even possible to download a free version of CAESES. Please contact us for more information. 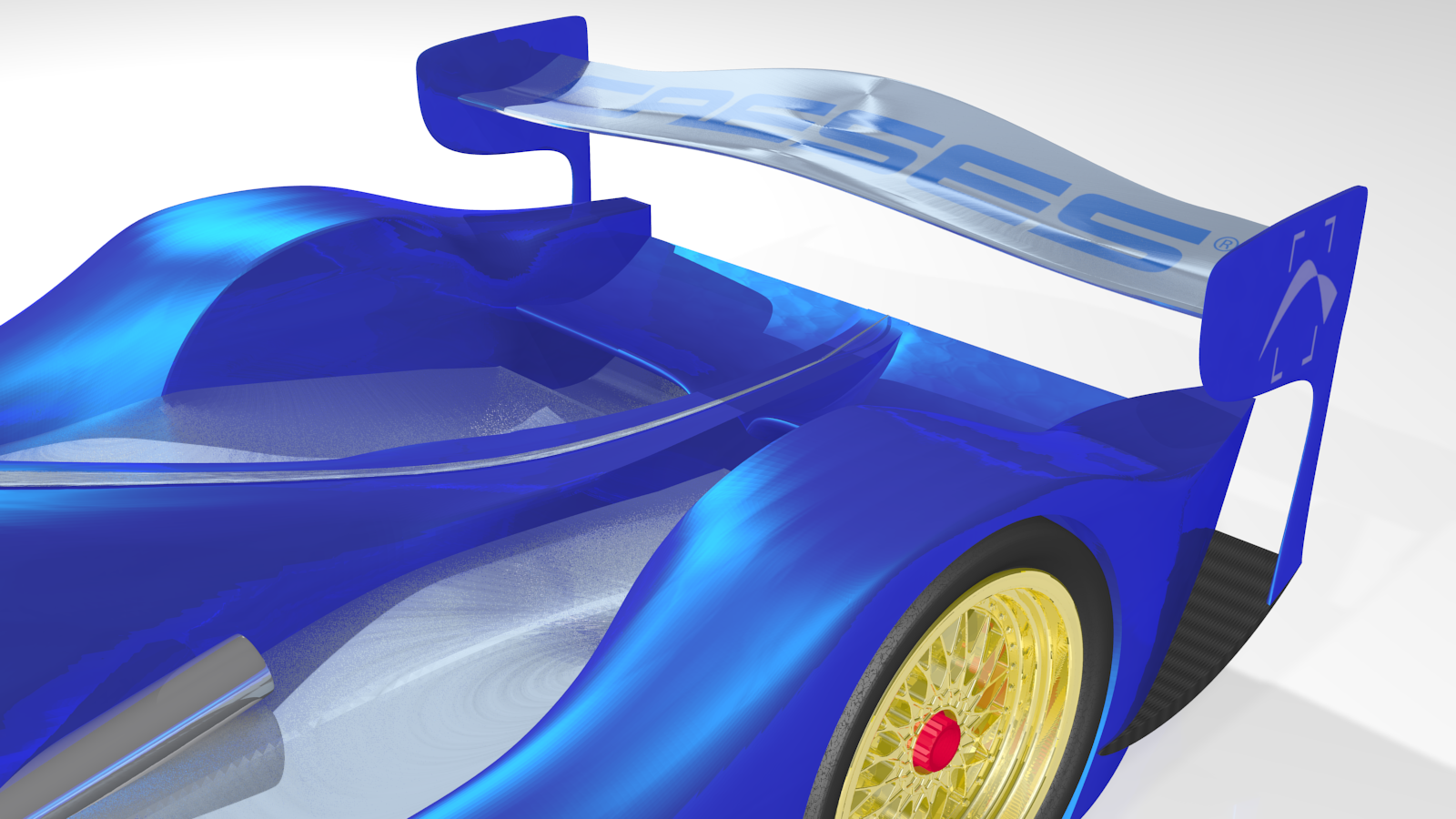 Also, it is time for the last KVRC race, in which MantiumCAE is competing with the virtual racing team MantiumRAY.
The new car was mainly developed using CAESES. In previous races, it was for example used to generate wing profiles, which were used to create the rear wing by means of a simple straight extrusion. For this race the wing was also parametrized along the wing span. This should be a key element of bringing MantiumRAY back to the very top of the podium.

The optimization showed that wings with good lift to drag values could not create the necessary levels of down force to balance the car. But as the new rear wing showed to be elegant and efficient, the car had to be balanced again. As the car had also been fully parametrized and run through a DoE, lots of data was available to balance the car using analytical methods. This showed to be very difficult, as every parameter that shifts the balance further to the rear was detrimental towards the other important performance factor: Lift / Drag. The following plots show this trade-off for the rear wing height:

Plots showing L/D and CoP over the rear wing height

Carefully using this data, the car was balanced and now reaches new levels of performance. Below are images of the new car: 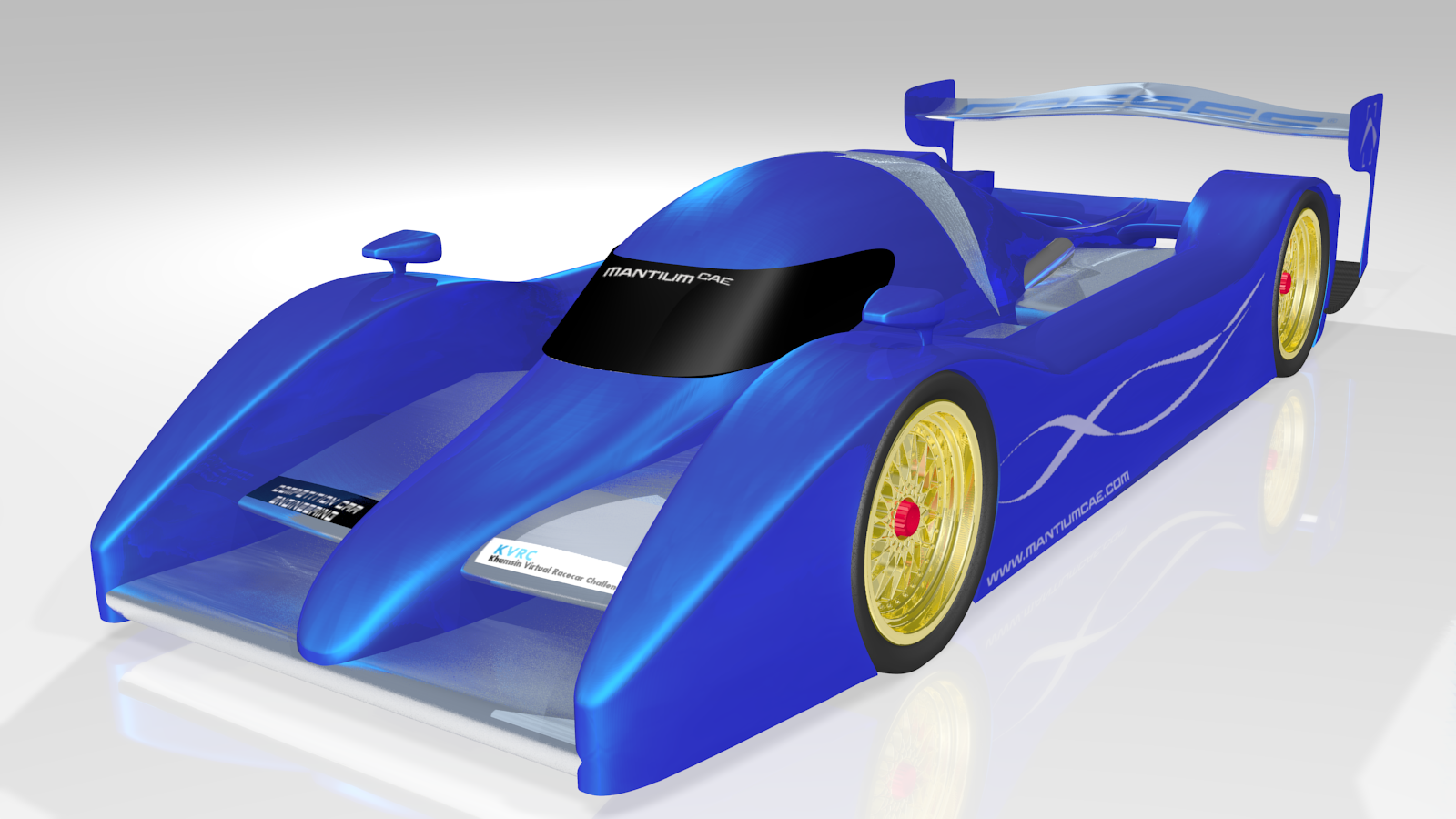 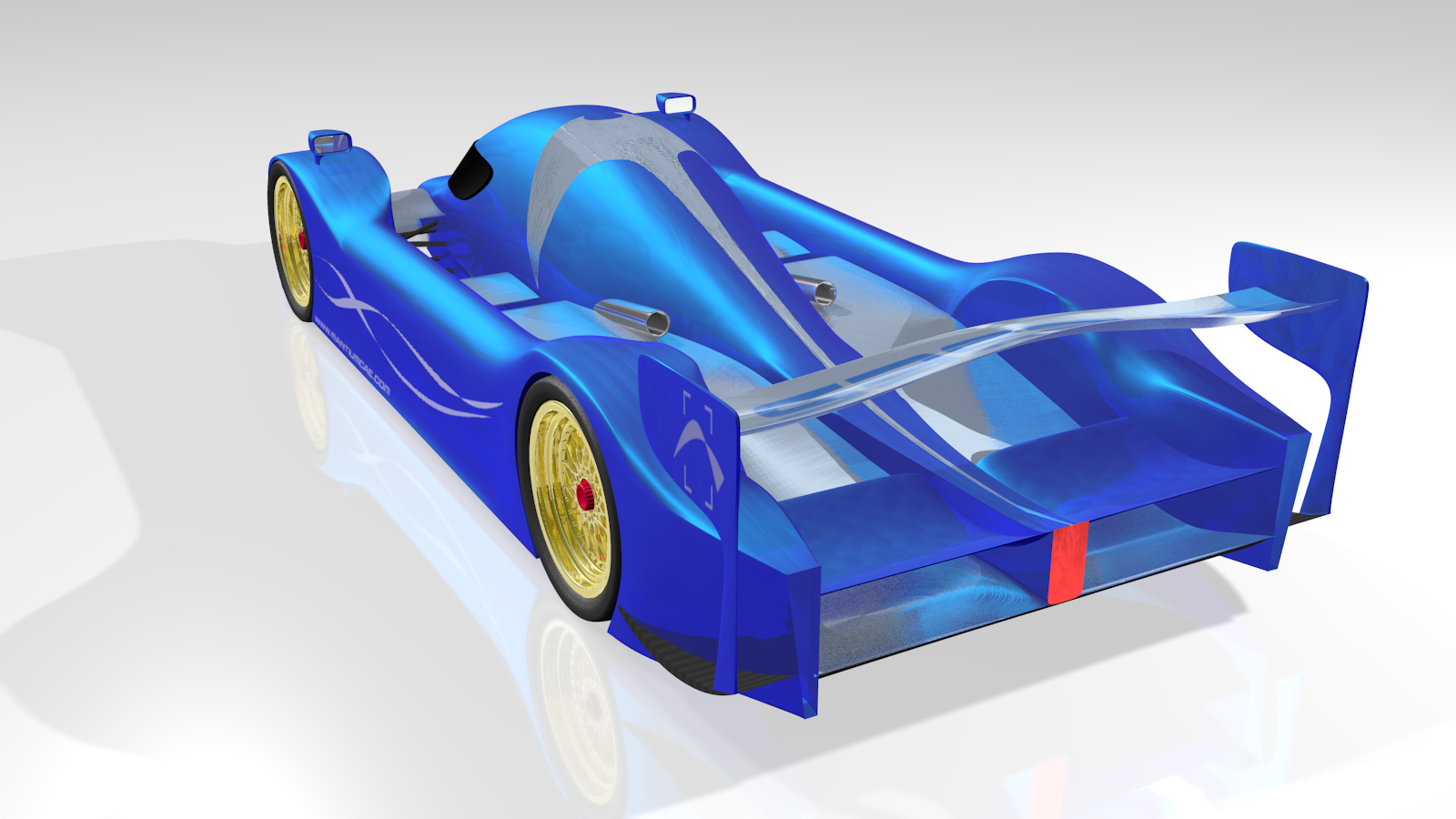 If this will prove to be sufficient, will be seen soon in the challenge, so please stay tuned or visit the forum.

The XFlow User Conference is over. MantiumCAE showed a well received presentation about cylinder head flows, DRS rear wing and flying cars.
The material from the conference should get uploaded soon to the conference homepage.
So far one very interesting and spectacular video has been made available:

Please take notice that everything seen here is happening inside of XFlow, once more showcasing the power of moving geometries together with the integrated body dynamics solver.

For anyone interested in running large scale CFD simulations there will be a webinar on how to use XFlow on the Rescale Cloud platform next Tuesday:

Another very interesting event will be the CAESES Experience Day Stuttgart on the 22. of October:

For more info on CAESES, please visit their homepage. There is even a free version of CAESES available!


Diese Seite benutzt Cookies, damit sie besser funktioniert. Wenn sie fortfahren stimmen sie dem zu. We use cookies to ensure that we give you the best experience on our website. If you continue to use this site we will assume that you are happy with this and cool EU laws. OkCookies ablehnen / No - I refuse cookiesMehr lesen / Read more
You can revoke your consent any time using the Revoke consent button.Zustimmung zurückziehen / Please revoke my cookie consent